If you like this kind of thing, there's plenty more here. I have to admit, while I love scoring rare, old 80's tracks, there's something to be said for looking at the cover art at the same time. Nice one, Klaus!
at Wednesday, August 29, 2007 1 comment:

Diary of a Battlestar Commander: 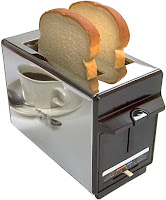 XO: 'Commander, there's a toaster in your private quarters!'
Commander: 'Thanks for your concern, but I prefer jelly donuts!'
XO: 'No Commander, you don't understand. There's a toaster in your quarters. And she's lying on a rug wearing not-very-much clothing!'
Commander: 'War is hell. Take over the con, Mr. Sulu!'
XO: 'Sir, my name is Tigh. As in Tigh one on.'
Commander: 'Well, either way, I'm interrogating the babe. I mean, toaster. Sheesh, this sci-fi stuff is blowing my mind.'

Well, which would you rather find in your kitchen on a Saturday morning?
Either way, I'm glad the Cylons lost the skirts - remember those back in '78?
at Wednesday, August 29, 2007 No comments:

So Say We All 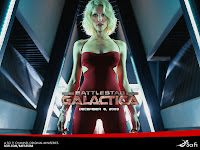 Just got time to give props to my fave TV show, the re-imagined Battlestar Galactica. I just discovered the show about two months ago and have been working through the first three seasons episode by episode. Just about every one either has me holding my breath, feeling the hairs on the back of my neck stand up, or both. It's a classic drama, with great acting, fantastic production and a real sense of pay-off. After the embarrassing thud of the final X-Files episodes, here's hoping the upcoming final season will be more The Return of the King and not Matrix Revolutions.

BTW, if you haven't already, check out the five minute version of the BSG miniseries - it's a riot.

It's A Blog, Already!

Finally decided to get off my (generously cushioned) ass and contribute some bon-mots to cyberspace. Half of my posts will be music related, the others will be about anything that springs into my head. If you like it, let me know. If you don't, then keep your stupid opinions to yourself, quite frankly.
at Tuesday, August 28, 2007 No comments: