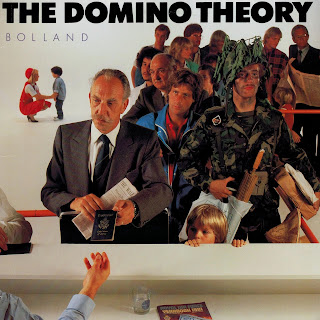 When Status Quo released the single "You're In The Army Now" in 1986 I had no idea that it was a (carbon copy) cover version of a 1981 track by two Dutch brothers who recorded under their family name, Bolland. Much as I like the dynamics of the song (slow build up, sound effects, slightly obscure lyrics) it goes some way to explaining why I did not care for any other Quo singles they released around that time, and when I discovered that it's original place was as part of this concept album called The Domino Theory, it made much more sense.

When I ripped this album from vinyl, I found that in true concept LP fashion there was no satisfactory way to cut up the individual tracks as they blend so well into each other. For that reason, my rip simply features two tracks, Side 1 and Side 2. Perhaps this is an anomaly in this day and age, but the album is not overly long and is all the better for being enjoyed as a single piece. It was also released on CD at a later point, but again the decision to cut up the album into individual tracks in that format lost something from the original presentation and concept.

Side One:
Overture - You're In The Army Now - The Dogs of War - Heart of Darkness - Cambodia Moon

Side Two
Heaven Can Wait - To The Battleground - Long Day's Journey Into The Night - Let's Help A.R.V.I.N. Out - Rendez-Vous With Radiation - Finale

Incidentally, I also liked the appearance of the Royal Air Force Yearbook on the front cover. As a kid I loved that magazine and collected them for several years.
at Tuesday, November 06, 2012 3 comments: