Those Brits and Their Talents

Not sure what to make of the results of Britain's Got Talent which finished tonight. Like many people, I was expecting Susan Boyle to win it, based on her nationwide popularity. Just goes to show, it all depends on what happens on the night. I have a feeling she'll be alright, though. I don't think any solo artist in recent memory will have such an eagerly awaited album. She could probably sell out Vegas tomorrow, but just like any other artist her long term prospects hinge on whether she has the drive and desire to perform at the highest level. I'm starting to think she should release either a single of "I Dreamed A Dream" or an album of Broadway standards and then relax for a bit before doing anything else. Hopefully the BGT concerts will be successful for her.

I also found myself rooting for the grandpa/granddaughter act 2 Grand based on their semi-final performance. While I though in the finale Sallie produced a very good vocal, I think the pressure got to John a little bit but I thought it was great to watch them sing together, very inspiring.

While I enjoyed watching the dance troupe Diversity, I would have to echo some other comments in that I've seen many comparable dance routines here in the States. I've mentioned my daughter performs ballet and jazz routines, so I've got to see quite a few amateur performances this year, and I would say several of those were at least as well choreographed with dramatic props and costume changes. Of course, I'm not sure if there is quite a similar high school dance/cheerleader tradition in Britain so it may seem a little more novel to people there.

Next up is America's Got Talent - but as everyone knows those yanks can take themselves a bit too seriously. I'm not sure we'll get to see chubby middle aged men in tight pants and patriotic waistcoats singing "It's Raining Men" - but there again maybe that's a good thing.
at Saturday, May 30, 2009 No comments:

Email ThisBlogThis!Share to TwitterShare to FacebookShare to Pinterest
Labels: TV

I've never heard of this alternative indie group before, or their self titled debut album released in 1989. It's a solid record, of which this track is typical:

Some Kind of Wonderful Compilation

I've never seen the 80's teen flick Some Kind of Wonderful, one of several John Hughes put together in a very prolific and commercially successful period. But I am a fan of the soundtrack, which features several relatively obscure cuts by cult artists such as Flesh For Lulu, Pete Shelley and Stephen Duffy. I recently bought the original 1987 CD for just a couple of dollars. Here's some highlights:

Lick The Tins - Can't Help Falling In Love
The Apartments - The Shyest Time
Blue Room - Cry Like This
at Saturday, May 30, 2009 3 comments:

I don't know a lot about Simon Byrne. But, I recently found his 1986 album Dream Crazy in a vinyl dollar bin in Pensacola. Here's a couple of tasters. Very reminiscent of Robert Palmer and his Riptide period.

I was a bit surprised to notice that in nearly two years I've never mentioned Richard Barone before. Richard is the former lead singer with Hoboken band The Bongos, which released classic albums such as Drums Along The Hudson, Numbers With Wings and Beat Hotel in the early 80's. I first discovered Clouds Over Eden due to the fact that Jules Shear showed up with some writing credits and Jules has always allied himself with some interesting artists.

Clouds Over Eden is a fairly atypical album for the early 1990's. There's some classic jangle pop ("Paper Airplane"), strident pop ("Nobody Knows Me"), angst-ridden ballads ("Forbidden"), chamber-pop ("Clouds Over Eden") and several other great tracks. It's been a favorite of mine for a few years now as a dense, cohesive and mature artistic statement.

Most of Richard's product is available either at iTunes or Amazon, and can be accessed through his website, www.richardbarone.com.

Here's three lesser known cuts from the album as a taster. I would also recommend River To River from Primal Dream and his charity track A Call To Prayer as must have downloads.

Lately, Richard has been recording with the legendary Tony Visconti and his latest release is the Glow EP, again available on iTunes and Amazon.
at Saturday, May 30, 2009 No comments:

In Case You Missed It

Not to blow my own trumpet or anything, but JC AKA The Vinyl Villain very kindly allowed me a guest spot on his blog, an undertaking which proved quite challenging given the quality of the writing by his other cohorts and compadres. You can read it here.
at Tuesday, May 26, 2009 1 comment:

Here's a cute song that's been in my head all week. Farrell & Farrell is a well-known CCM group that continually updated their sound during the '70's and '80's. Like a lot of material from this era and in the genre, the lyrical ideas remain very relevant despite often dated production and occasionally banal statements. "People In A Box" is about the power of the media to tell us consumers "what to wear, how to style and do my hair". I took the small liberty of remixing the track as I recorded it from vinyl. I edited out a brief rap/spoken word interlude and generally punched it up a bit to fall around the three minute mark. Could have been a pop hit back then, I reckon!! 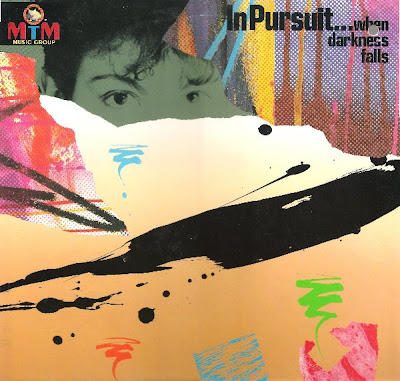 From the album sleeve: "Originality. Sincerity. Insight. Traits not easily found in the media overkill of rock music today...until you discover the exciting sound of In Pursuit. Based in Nashville, Tennessee, illustrating that the Music City is the home of much more than just country music, In Pursuit is guitarist Jay Joyce, bassist Emma and drummer Jeff Boggs. In Pursuit creates an energetic pop-influenced style of rock and roll layered behind enchanting harmonies, with an emphasis on intelligent, thoughtful lyrics."

Email ThisBlogThis!Share to TwitterShare to FacebookShare to Pinterest
Labels: 80's, In Pursuit, rapidshare, Turn Back The Clock

It's always a pleasure to come across a band website that is comprehensive, well put together, and - most importantly - has lots of links to video clips, demos and B-Sides. For anyone who has even a passing interest in the Thrashing Doves, you will find all of the above, and more at www.thrashingdoves.co.uk. Well worth a visit. The audio section also includes some early tapes and the two singles by previous band The Climb, which I featured a few months ago here without realizing the connection.

I also just came across a comprehensive website dedicated to New Musik. A must visit for anyone interested in the quirky English synth genius of Tony Mansfield and pals.

Thanks for all your well-wishes by the way. Things progressed well so we are just going through the recovery phase. There will be a guest post by your truly at The Vinyl Villain later this month going into a little more detail. After a recent feature by Jon at The Vinyl District, I'm starting to feel quite popular! (Oh, except for the devastating news I received this week that I am no longer on Davy's blogroll!!! The Shame!!)
at Saturday, May 09, 2009 No comments:

I know I don't really need to explain anything, but my stepson is having surgery at the moment, so life is a little too hectic to put some posts together. C'est la vie.
at Thursday, May 07, 2009 9 comments: 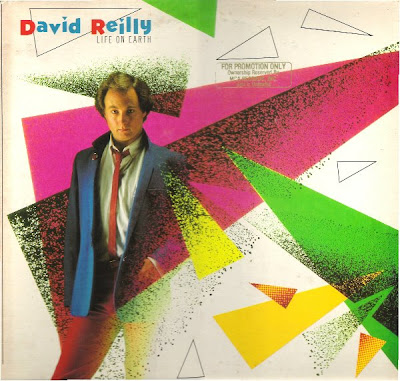 Now that's an '80's album cover. I saw this album in Goodwill for 99 cents and knew I just had to have it. You've got the bright colors, geometric shapes, a skinny tie, red pants and a guy who looks like an accountant. On the back cover, armed with a red Stratocaster, you get the impression David wants to be the new Mark Knopfler.

I wasn't sure what to expect from this. The album was produced by Nick Tauber and recorded in England, but based on the cover and the song titles, it appeared quintessentially American. It's an MCA Records release. Nick Tauber went on to produce Toyah and Marillion, so you might expect some progressive or art-rock flourishes. What the album is, in fact, is a wide ranging, and competently performed set. There is new wave pop, solid balladeering and, in some places, strong rock production and the guitar solos hinted at by the presence of the Stratocaster. David is a decent singer, too, while the subject matter is just off-center enough to be interesting.

Good luck finding out anything else about David Reilly. A couple of cuts were released as singles in Europe, but there is no evidence he ever recorded anything else. Perhaps he really was an accountant.

[UPDATE: Some nice memories of the recording sessions from Phil Spalding the bass player here ]
at Sunday, May 03, 2009 4 comments: