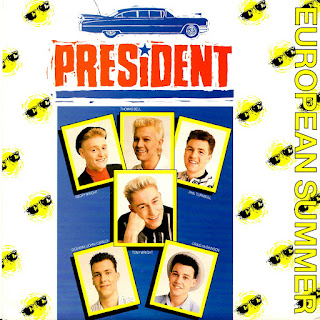 One of the (many) 80's singles in my box I have held off posting, President was at the time a vibrant young British band centered around two brothers, Geoff and Tony Wright. Given that the summer of 1987 also brought us droves of europap like Spagna and Sabrina, you might well fear the worst, but in fact despite only having one song the songwriting ability was immediately in evidence. The single was released on a small label (Rekords UK) and I suspect would have been well received by a wider audience if it had made more radio playlists at the time. There was also a video filmed at Saltburn by the Sea in July 1987.

For much of the music I feature, that would be the end of the story, but happily in recent years Geoff and Tony have returning to recording and performing with impressive results. They released an album, Breathe, in 2014 and posted some videos. I really liked "Coast" which saw a digital release a couple of years ago.


I'm not going to post my rips of the "European Summer" single here - I also have the 12 inch - because all the tracks are available on Spotify and other digital media outlets if you search for the European Summer EP. Kudos to the band for keeping their name all these years, even if in the internet age it makes it a little harder to google search them.

They also have a new single out this week called "Reach Out" which is nothing if not timely.

Thanks to Geoff for reaching out - I really should have mentioned them before now!
at Monday, May 25, 2020 2 comments: