Just a quick shout out to "Where This Kind of Music Happens", a new blog with a great roster of new wave and synthpop artists featured. Be sure to check it out!

Also if you like mooning over music magazines from the early '80's, then check out Brian's awesome Smash Hits archive.

From the indie pop scene I've been enjoying Consolation Prizes, with posts of bands like Friends Again, Jazzateers, The Go-Betweens and many more.

I'm noticing not only that there seem to be a lot more music blogs springing up, but most of them are being updated daily. Here's to discovering something new!
at Friday, June 04, 2010 1 comment:

I bought it because it was a recent release. I expected something maybe like the Indigo Girls or maybe Tegan & Sara.

The Verdict: This album rocks, hard.Surprisingly accessible and melodic. The only downside was that after four or five similar tracks I was out of breath. I was expecting a change of pace but there wasn't one (at least on what I heard). But good driving music.

Another one where I liked the cover and artwork. No expectations.

The Verdict: I had put this on before and remembered that I liked it. The first track is a good, surging pop song. The next couple of tracks just drifted off a little for me. Not sure on this, might be a grower. 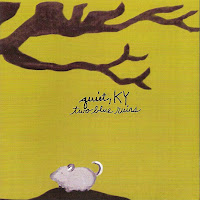 The Verdict: A winner all the way! Excellent, accessible acoustic settings. If this was by a major band on a major label these songs would be on all those acoustic compilations with Radiohead, Magnet, Nick Drake and Badly Drawn Boy. A gentle, delicate, warmly sung pleasure. Very, very good indeed.

Worthy Download:   The whole Two Blue Ruins album! But not apparently available anywhere right now. Try "Florentina" or "Mr. Welles" to get a taste.
at Tuesday, June 01, 2010 No comments: