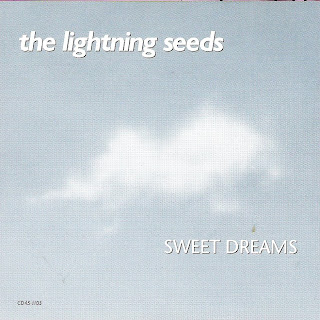 I knew that the singles released from The Lightning Seeds debut CD Cloudcuckooland included the classic single "Pure" and the decent follow up "All I Want". With a bit of prodding I might have remembered that "Joy" was the other single release. Which made my discovery of this promotional single for "Sweet Dreams" just a little more intriguing. I couldn't say I remembered this track at all from the album - but then again I haven't heard the LP itself in years. So it was kind of a nice surprise. Plus, the two extra tracks - which found their way on to the "Sense" single release a couple of years later - are both rewarding in themselves. So here they all are.
Download
at Saturday, August 01, 2009

just found this blog, great music. the lightning seeds are still the most underated band ever. great tunes, great sound & unique singer.
all i want was so good they released it twice :)

I love this post! I wasn't even aware they recorded "Flaming Sword" as The Lightning Seeds. Absolutely fantastic! Is it just me or is it getting "Hot! Hot! Hot!" on your side of the blogosphere? THANKS FIFTY!!!

Well thanks McDoc, I certainly do my best.

gotta wonder why ian didn't include "flaming sword" on the debut album, great track, thanks!

"Flaming Sword" certainly is a great track - and one that Ian Broudie had released as a single, previously, mid-80s, under the name "Care": that act did one other absolutely smashing single, "My Boyish Days (Drink To Me); their album was never released, because of a complete lack of commercial interest in the singles; but has come out much more recently, as "Diamonds and Emeralds": every track, more or less, is a winner!